Venture Capitalist Charged by S.E.C. Had a Telltale Past

Last week, the Securities and Exchange Commission and the Department of Justice accused William “Boots” Del Biaggio, a former Silicon Valley venture capitalist, with defrauding investors of $65 million. Such crimes could have been prevented with fairly simple background checks, argues Ken Springer. A former F.B.I. special agent who specialized in white-collar crimes, he now runs Corporate Resolutions, a firm that conducts investigations and background checks for venture capital and private equity firms, hedge funds and banks. 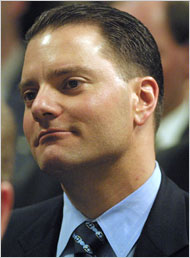 “It’s like history repeating itself. He had charges of fraudulent activity going back to 2003,” Mr. Springer said. “You have to look at the track record, background and reputation. They just assumed this guy was good for his money.”

Mr. Del Biaggio, who until May was a partner at venture debt firm Sand Hill Capital, has been accused of setting up a Ponzi scheme to mislead investors into giving him money, as well as doctoring brokerage statements of unsuspecting people and using them as collateral to take out loans. He used the money to buy his stake in the Nashville Predators professional hockey team, gamble, decorate luxury homes and generally live a lavish lifestyle, according to the S.E.C.

In August 2003, Mr. Del Biaggio and Sand Hill Capital were sued in Santa Clara County by Martin Avenue Enterprises for fraud, and in October 2003, Mr. Del Biaggio was sued in New Jersey by Charles deG Upjohn for breach of contract. In 2004, he waged a proxy fight against his father, which Mr. Springer said would also have raised a red flag during a background check.

In May and June of this year, Mr. Del Biaggio was sued by DBG Investments, Security Pacific Bank, Modern Bank, Heritage Bank and AEG Facilities, as The San Jose Mercury News has reported.

He also became embroiled in controversy this summer over claims he bilked the Nashville Predators out of money, as The Times reported in the Slap Shot hockey blog.

In September, hockey player Luc Robitaille sued him for using fraudulent financial statements in a real estate deal the two were doing together.

Elliot Peters, Mr. Del Biaggio’s attorney, said Tuesday that he expected Mr. Del Biaggio to plead guilty eventually to certain charges and that his client had been fully cooperating with federal authorities. Mr. Del Biaggio filed for bankruptcy protection in June “so that there would be an orderly process to try and repay creditors,” said Mr. Peters, who is a partner at Keker & Van Nest in San Francisco. “Boots Del Biaggio wants to do everything he can to make things right.”

Victims most likely trusted Mr. Del Biaggio and failed to look into his background because of his business and family connections in Silicon Valley, Mr. Springer said. Mr. Del Biaggio co-founded the Heritage Bank of Commerce in San Jose, Calif., with his father, and founded Sand Hill Capital.

As a result, when he approached investors or lenders, they were more likely to blindly trust him, Mr. Springer said. “The richer they appear — the fact that he’s a second-generation, well-known name in Silicon Valley — everyone just assumes they’re good for their money,” Mr. Springer said.

However, he added, some quick research would have revealed that Mr. Del Biaggio had faced charges of fraudulent activity going back to 2003, including lawsuits and “a trail of unhappy employees and investors.”

“People didn’t do their homework,” Mr. Springer said. “The bigger your balance sheet is, the less homework they do on these things.”

Mr. Peters said that Mr. Del Biaggio’s investing track record, not his family connections, earned him trust. “There were a lot of people who trusted Boots because he’d made money for them in the past and they knew him well,” he said. “I don’t think it had to do with his family. Maybe he got more trust than was in his own best interest.”

Corporate Resolutions, which often does background checks for venture capital firms and other investors before they invest in a new enterprise, looks for patterns of lawsuits and indications of financial stress and interviews former employees and business partners, Mr. Springer said.

The authorities often discover cases of fraud when disillusioned employees or business partners report them, Mr. Springer said, which is why he recommends that companies run ethics hotlines, where people can anonymously report questionable activity.

“He’s going to go to jail for a long time, but it wasn’t very sophisticated and it wasn’t well thought-out,” Mr. Springer said. Mr. Del Biaggio has not yet been sentenced, but his criminal charge of securities fraud carries a maximum 25-year prison term.

“In my experience, people tend to get into messes like this bit by bit, thinking every step of the way that they’re going to get out of it,” Mr. Peters said. “I think he honestly believed throughout that he’d be able to sell things and make everything fine.”